Scanno (Scannë in the local dialect) is a town in the province of L’Aquila with a population of 1,948. The town, which is located on the Marsicani mountains and partly in the Parco Nazionale d’Abruzzo, Lazio e Molise, is a member of the Comunità Montana Peligna, a local association of mountain municipalities.

Scanno attracts visitors in both winter and summer. Nearby attractions include the lake of the same name (although most of it is located in Villalago territory), the ski resorts at Passo Godi and Monte Rotondo, the Mount Greco plateaus, Lake Pantaniello and, of course, the Riserva Naturale Guidata Gole del Sagittario.

In the town’s historic centre are many goldsmiths’ shops—so many, in fact, that the street on which they are located (known locally as la ciambella because of its rounded form) could be called “goldsmiths’ street”.

Scanno was a favourite destination of many Italian and foreign authors, but was especially popular among photographers. Throughout the 20th century, its landscape and inhabitants were immortalized in famous photographs by Hilde Lotz-Bauer, Henri Cartier-Bresson, Mario Giacomelli, Gianni Berengo Gardin, Ferdinando Scianna and many others. In 1964, a photograph taken in Scanno by Mario Giacomelli was included in a prestigious photography exhibit at the Museum of Modern Art in New York. The image was given the title Il bambino di Scanno or Scanno Boy. 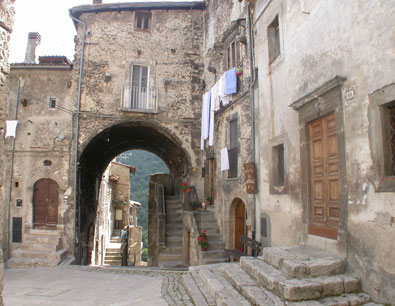 The town’s numerous old buildings, doorways and archways are also of interest.